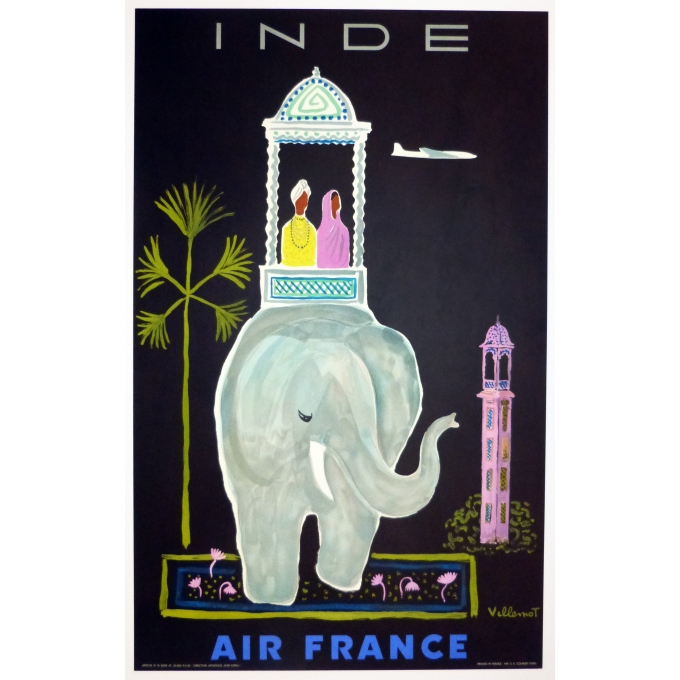 This original Air France travel poster from 1956 was designed by Bernard Villemot (1911 - 1989) and printed by Courbet, Paris. Although this lithography isn’t Villemot’s first for the airline, this particular one went on to cement his reputation for creative excellence, especially given that he had never actually travelled to India himself. Three years previously, he had been spotted by Orangina and revolutionised their visual communication with his adverts featuring parasols designed to look like orange peel, inspired by Cappiello’s poster for Campari in 1921. Inès Clercq wrote that this vintage poster for the Air France India series “is a masterful illustration for the feeling it conveys, life magically coming to a standstill, the moment before the passenger steps into the waiting plane” (1) Chauvet et Thibault in Affiches Air France Rêver le Monde, Le Cherche Midi, 2006, p. 108

Printed by Courbet in Paris

Feel free to contact us via email or phone for any information.
Your safety is important to us. All transactions are secured, the payment phase is handled on the bank's website. If you have any questions, you can call us on +33 1 45 48 77 97.
The shipping is covered by Elbé (France & International)
The vintage posters that are proposed to you are genuine posters, expertised by Elbé, washed and canvas mounted by our craftsmen in France.